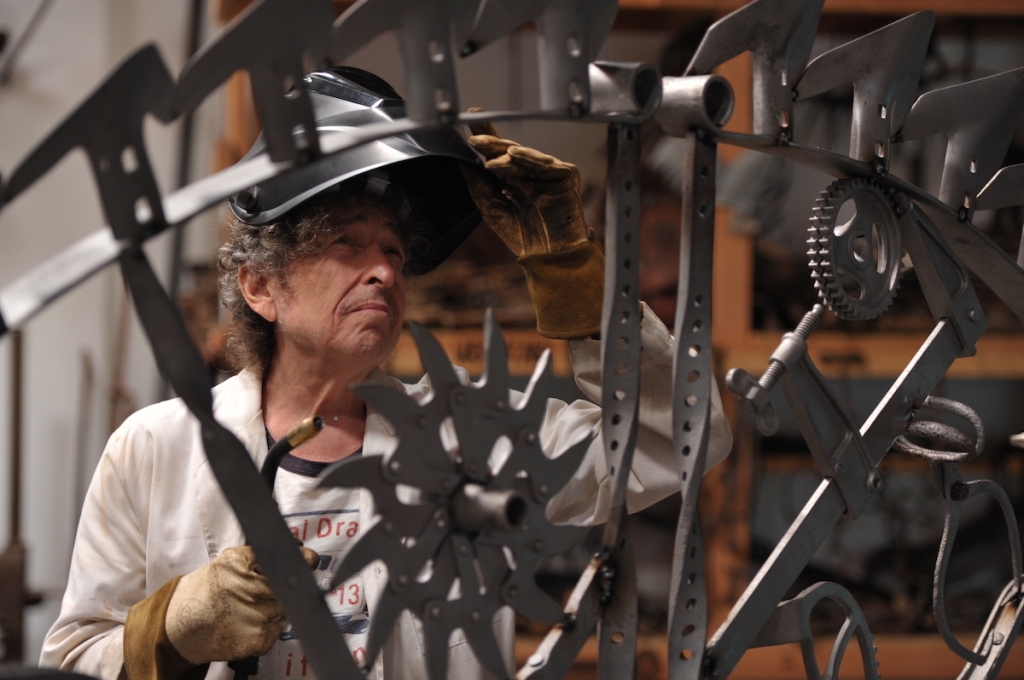 Focusing on a rarely seen side of one of America’s most indelible artists of all kinds, “Bob Dylan: Retrospectrum” will be the biggest and broadest survey of Dylan’s visual oeuvre ever presented in the United States during of its opening in Miami this week. After a first edition two years ago at the Museum of Modern Art (MAM) in Shanghai, the exhibition at the Frost Art Museum of Florida International University will present nearly 200 paintings, drawings and iron sculptures of a familiar figure better known for the way he handles words.

The exhibition covers some 60 years of Dylan’s career and includes what a description of the exhibition calls “immersive and interactive displays” that “simultaneously illuminate the context of his artistic evolution, in tandem with the musical and literary canon. of Dylan”. It was curated, premiering in China in 2019 and now in its modified form in Miami, by MAM Artistic Director Shai Baitel.

In a press release about the show, the ever elusive and enigmatic Dylan, who won the Nobel Prize in Literature in 2016, said, “Seeing many of my works years after I finished them is a fascinating experience. I don’t really associate them with any particular time, place or state of mind, but I see them as part of a long arc; a continuation of how we move through the world and how our perceptions are shaped and changed by life. One can be as profoundly influenced by the events in Morretes, Brazil, as by the man who sells El País to Madrid.”

Ahead of “Retrospectrum,” which runs until April 17, 2022, ART news corresponded with Baitel about how he put together the show and what he hopes fans of Dylan’s music can learn about his eye for artistry.

ARTnews: How did the idea for “Bob Dylan: Retrospectrum” in Shanghai come about?

Shai Baitel: I have always been fascinated by Dylan’s unique artistic expressions and his different ways of seeing our world. When I first saw his visual works, they represented yet another medium through which he manages to convey his observations and successfully tell a story. I like his choice of subject, his technique and his multiple skills. His visual art speaks to me in a very powerful, familiar yet enchanting way. I spent hours looking at his paintings, navigating through my thoughts and emotions to times and places near and far.

I was aware that even after decades of drawing and painting, there had never been a full public exhibition of his works. So when I was appointed as artistic director of MAM Shanghai, I immediately approached Dylan’s management with the idea of ​​a retrospective exhibition of his visual art. Fortunately, they accepted.

ARTnews: What was Bob Dylan’s first reaction to the idea of ​​the show?

Baitel: As he has shown time and again over six decades of creative production, Dylan is the master of his own voice and expression! Having the opportunity to contextualize this great third pillar of his practice – visual art – within the larger context of his creative expression in music and writing is a profound privilege.

ARTnews: He praised the exhibition, but how much, or little, was he involved in planning it?

Baitel: Once we pitched the concept for the show to Dylan, his storytelling and curation were left to us.

ARTnews: What other numbers have come in handy to help you understand Dylan’s importance as an artist outside of music?

Baitel: We have done extensive research. We have spoken to many scholars, artists, historians and intellectuals to ensure that we fully understand the background and context of Dylan’s creation. Many of those we have engaged have contributed significantly to our collective knowledge and understanding, and some of them have even contributed to the catalog of the exhibition.

ARTnews: What is most important to you in terms of what audiences will take away from seeing this show?

Baitel: Dylan is one of America’s greatest artists, and a multifaceted artist. I would like them to appreciate Dylan not only as a musician and writer, but also as a visual artist, and to appreciate the artwork as representative of a particular person’s journey exploring diverse forms of expression. These works have never been shown together in the United States, and some of them have never been seen by anyone before, so there’s a lot to discover.

ARTnews: In your opinion, what could surprise the public the most?

Baitel: The incredible variety – just like in his music, Bob Dylan always seems to experiment with different approaches to his visual art. One series differs greatly from another in often remarkable ways.

ARTnews: From your perspective, how did Dylan’s obvious excellence as a writer figure most directly (or indirectly) in the way he approached creating visual art?

Baitel: I think what sets Dylan apart as a songwriter is his willingness to take disparate literary and musical strains and incorporate them into his unique vision. You can see the same kind of openness and willingness to experiment in Dylan’s visual work. I am convinced that creativity, whatever the field or the context, comes from the same place deep within us. And the difference in its articulation across different art forms only serves to deepen our understanding of this creativity.

In the series “Mondo Scripto“, Dylan articulates lyrics he wrote by hand via illustration. This creates a unique point of reference where the three pillars of his work – his music, his writing and his visual art – intersect directly.

ARTnews: He has worked in several mediums, but what do you think are the most significant to him overall?

Baitel: It would be really hard to say – personally I love his work in oils and mixed media and really appreciate his work in iron. I don’t think one particular medium is more important than another. The great thing about putting together this wide variety of artwork is that it gives you an appreciation of his artistic journey. I think it’s better collectively.

ARTnews: How did the title “Retrospectrum” come about? That’s a very good term…

Baitel: Yes it is a beautiful suitcase! The title was suggested by Mr. Dylan. We all loved it immediately.

ARTnews: How will the Florida exhibition be different from the Shanghai one?

Baitel: The Frost Art Museum is a different and smaller space than Shanghai. So we wanted to distil each series and each period down to their essence. Additionally, we assumed that Bob Dylan wasn’t as well-known to Chinese audiences as he would be to Frost audiences, so we spent a bit more time in Shanghai to explain his impact on Western culture. The works we have collected for the Frost exhibition are the best of Dylan’s works, and we will be launching a new series of his works, ‘Deep Focus’, which is simply breathtaking.

ARTnews: Does what seems to be a difference in audiences’ familiarity with the depths of Dylan’s story make you think differently about ways to present the show in Shanghai compared to the United States?

Baitel: The good thing about art is that you don’t need a degree to “understand” it. Art speaks to you or does not speak to you. I don’t think you need to know who Bob Dylan is to appreciate his works. That said, for those who do, there are many implications in his creations that will resonate.

ARTnews: Is the exhibition planned to travel elsewhere?

Baitel: Absolutely, we have received many requests from all over the world and will be announcing our next location in the coming months.