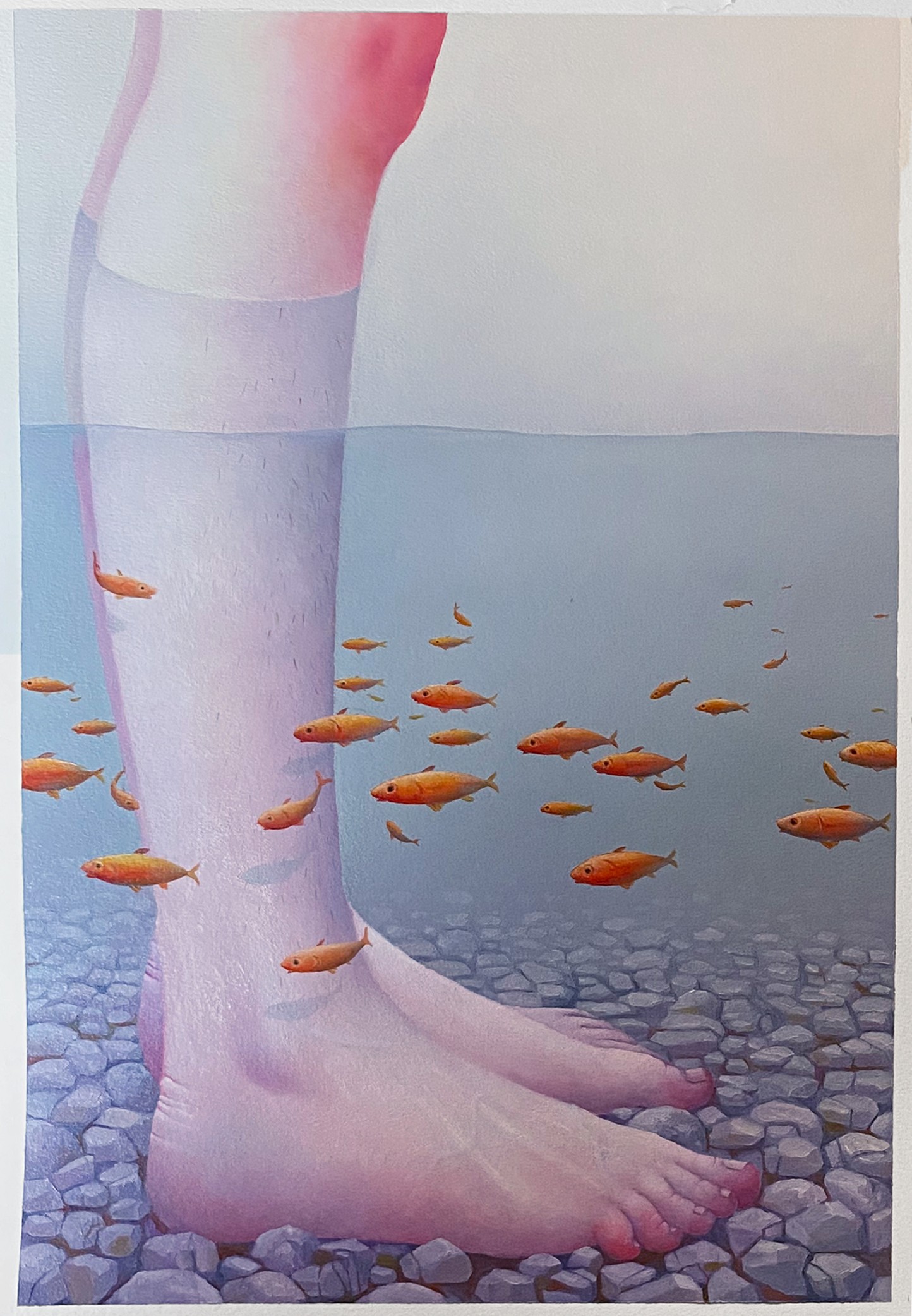 Part of a series called “New Work On Paper”, the painting detail featured on this month’s cover suggests an aquatic dreamscape in fluid surreality, featuring two feet with fish submerged in the water. Inspired by the life of environmentalist Rachel Carson, painter Ashley Williams wanted to tell a story about Carson’s direct, sensory experiences in nature and his deeply romantic relationship with his friend Dorothy Freeman. “It’s a story about longing, impending environmental catastrophe and the power of dreams,” Williams says.

Initially, Williams wanted to create a comic strip based on Carson’s life, but found that the illustrations quickly became too abstract to work as a linear narrative. “Over time, the project evolved into a series of paintings, but the graphic novel/comic book format remained,” she explains. “I’ve always been drawn to the aesthetics of comics: dividing an image into cells, moving the reader within the space of a page.”

Completed during the pandemic, the painting echoed Williams’ sense of isolation. “I found myself thinking about the way we divide our days, the patterns of the sun and the moon, the weird ways time seems to come to a screeching halt when we spend so much time alone,” he says. she.

Williams, a resident of South Hadley, Massachusetts, is also inspired by nature. “I believe we can learn from plants, animals, and rocks how to be better humans,” Williams says. Rachel Carson believed in it too. “I often wonder how far can we understand a cloud, a tree or a rock? Can we develop a vocabulary that allows us to do this? What does our desire to engage with the non-human world tell us about ourselves? My main goal as an artist is to discover alternative and more empathetic ways to interact with nature and with each other,” she adds.

Rendered in oil on gesso paper, the painting is an exploration of touch and communication based on the senses. “It’s also the story of an impending environmental catastrophe, which you can see in the final image of the series,” Williams says.

Although this particular piece will not be on display, other works by Williams will be featured in “Urgent Beings”, an exhibition at the new Tombstone Gallery in Kingston, July 2-31. “I created a huge painting of a rock covered in lichen and a series of paired paintings and sculptures,” Williams says of the works that will be featured in the exhibition. “I played with light, shadow and layers of oil wallpaper.”

Much of the work is associated with “data” and “fieldnotes”, which serve as an account of Williams’ attempts to connect with the non-human world. The text and color “base samples” contain information about animal communication, questions about the nature of language and its deep desire for interspecies understanding.

Headstone’s newly renovated 1,200 square foot gallery was created by artists Lauren Aitken and Chase Folsom and features exhibitions of contemporary artwork by emerging and established artists from across North America.

Folsom and Williams attended graduate school together at UC Boulder and have stayed in touch ever since. “We were thrilled to know that Ashley was nearby in Massachusetts and available to show with us,” Aitken and Folsom replied via email.

In all of her work, Williams strives to communicate desire. “My work is always a kind of reaching out – a desire for human and non-human connection,” she says. “I call all my work ‘attempts to communicate’. These attempts sometimes fail. There are so many mumbles and missteps in the process. I am deeply interested in the failures of language and our eagerness to connect with each other despite how difficult it often is. I think mumbling and stumbling is oddly beautiful.

2022-07-01
Previous Post: Music, visual arts, animation and fashion come together in ‘The Color Red’ – OUTInPerth | LGBTQIA+ News and Culture | OUTInPerth
Next Post: BTS’s RM Opens Up About His Love For Art, Says Visual Art Helped Him Stay Calm On Stage